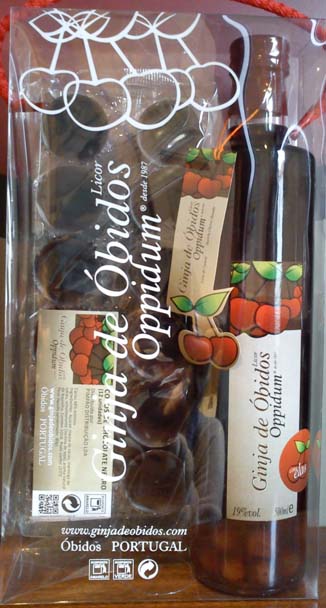 Ginja de Obidos Oppidum is a liqueur produced by a family run company founded in 1987 by Dario Pimpao in the village of Sobral da Lagoa, Obidos, inspired by a decades old family tradition of providing sour cherry to liqueur producers all around Portugal. A long time interest in trasforming this prime material into different products led Dario Pimpao to put his expertise to good use when he decided to start producing and perfecting his Ginja de Obidos Oppidum. Now recognized for its excellent quality, its continuation is guaranteed in the hands of his daughter Marta Pimpao.

It all begins with the selection of the best fruit from local growers, who for decades have been supplying Ginja with unique organoleptic characteristics, allowing the production of a distinctive liqueur which is aromatic and well baalnced. Velevety and full bodied, this liqueur will satisfy the most demanding palates.

Through a process which is slow by nature and in which time alone is responsible for the ageing, Oppidum is proud to use experience and knowledge to produce the original ginja de Obidos.

The Perfect symbiosis between ginja and chocolate inspired Dario Pimpao to serve his ginja in chocolate cups.

The outstanding success of this idea, accompained by the slogan 'drink the ginja and eat the cup' today copied all over the country, led him to bolder experiences and the invention of ginja chocolate liqueuer, launched in 2004 and of which he holds the patent. In 2011 Oppidum suprised the market once again when it introduced its delicious chocolates with a ginja liqueur fillings.

Oppidum has earned over the years complements from the most demanding of connisseurs, has won important prizes in international contests and has conquered loyalty and recognition from customers who turn to oppidum for their favourite Ginja de Obidos.